Come and See the Magic and the Horror of Vitebsk Oblast


Marc Chagall called Vitebsk "my second Paris." For him the city neighboring his birth village Liozna is captured in memory that eludes the devastation of the Great Purge and World War II, as he spent those years in France and America. In a large series of works that the artist began after his return to his hometown in June 1914, Vitebsk is depicted as a fantastical dreamlike place.

The magical city of Chagall is radically different from where my mother was born and spent her first four or so years. Both my mother and Chagall were born in small villages outside of the city and bordering Russia, though she never visited the region’s capital. 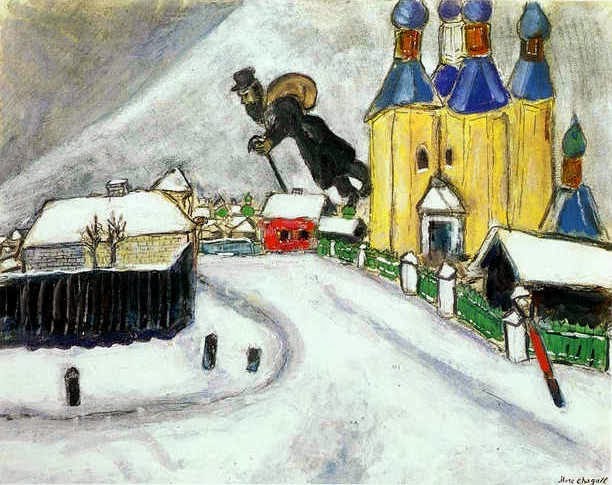 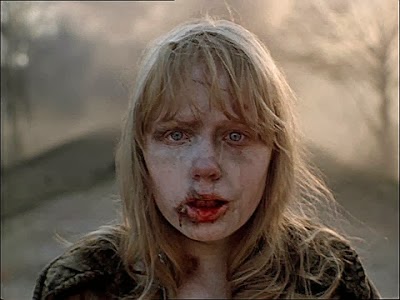 Images: Chagall's Over Vitebsk (at MoMA, acquired through the Lillie P. Bliss Bequest); still from Come and See

The childlike innocence of Chagall’s work is at odds with my imagined representation of the region of my mother’s tragic early childhood. My mother narrowly escaped one of more than 600 Belarusian villages burned to the ground. The only reference I have that even begins to depict what my mother saw is from the 1985 film Come and See.

In 1943, two Belarusian boys dig in a sand field in search of abandoned rifles. Young Flyora finds an SVT-40 rifle and the next day he joins partisans who come and take him from his house against his distraught mother’s wishes. Though members of my mother’s family and close friends were murdered and tortured by partisans, the critically acclaimed film’s central character offers insight into how innocence is quickly stolen, if not from a very different perspective.

A fan of gory horror films, I find few movies difficult to watch. I assumed this one was particularly painful since it depicts the real-life horror my mother experienced of watching a village and its inhabitants burned to the ground in a terrifying mass murder campaign.

“I understood that this would be a very brutal film and that it was unlikely that people would be able to watch it. I told this to my screenplay coauthor, the writer Ales Adamovich. But he replied: ‘Let them not watch it, then. This is something we must leave after us. As evidence of war, and as a plea for peace,’” said director Elem Klimov.

Klimov said ambulances had to be called to remove viewers from theaters in the Soviet Union and at foreign screenings. During a discussion after one viewing, an elderly German man acknowledged: "I was a soldier of the Wehrmacht; moreover, an officer of the Wehrmacht. I traveled through all of Poland and Belarus, finally reaching Ukraine. I will testify: everything that is told in this film is the truth. And the most frightening and shameful thing for me is that this film will be seen by my children and grandchildren.”

Klimov, who died in 2003, never made any films after Come and See. "I lost interest in making films,” he said in 2001. “Everything that was possible I felt I had already done."

Adamovich fought with the Belarussian partisans as a teenager, and Klimov was moved by a book I Am from the Burning Village, comprised of first-hand accounts of survivors like my mother. Innocent victims – especially young children -- are victims, despite their ethnic background or political inclination.

Klimov also watched footage of survivors recalling their experiences. “I will never forget the face and eyes of one peasant, and his quiet recollection about how his whole village had been herded into a church, and how just before they were about to be burned, an officer of the Sonderkommando gave them the offer: ‘Whoever has no children can leave.’ And he couldn't take it, he left, and left behind his wife and little kids... or about how another village was burned: the adults were all herded into a barn, but the children were left behind. And later, the drunk men surrounded them with sheepdogs and let the dogs tear the children to pieces.”

These second-hand accounts are like those of my mother, who tearfully recalls how so many loved ones were brutally killed.

“My aunt, at that time, was in school in Russia where they had to learn German. The German soldiers took her and another 16-year old, and they were asking who is living in this house and this house, and they had a list of people who they were told to burn down the houses. She was 16, so of course, she's going to say whose house it was. She was lucky because her father was also a Partisan, and of course he wasn't there at that time, but he was in their party. And my father was against the Bolsheviks and everything else, and he was in a German zone. And so when the Partisans came after them they told him whose house it was, they came to get my aunt, they wanted just her. My grandmother, she ran after her daughter. And then they would go and take them a few miles away from there, but they had to cross some kind of a river, and they were going to be interrogated there by the Partisans, where their headquarters were. But what happened, it became close to nighttime, and they had to get out of that region because I guess that's when the Germans were coming or something, so the Partisans said that we know what's going to happen with them, so they didn’t want to waste the bullets, I guess. And so they used the other part of the gun (rifle), the wooden part, and they beat their heads open. That's how they were killed, and when my father saw that, it really affected his mental state for the rest of his life. And so – [sobbing] then we had to just, I guess, put them in ground and we had to leave there because the fighting between the Germans and Russians would start.”

Most people truly begin to understand mortality and the human condition when their first parent or close relative dies.

For my mother, losing a peer was perhaps the most shattering glimpse into the frailty of life.

“I saw when the fighting was going on between the Germans and Russians -- I'm not sure if it was Partisans or the or the, Russian Army. I don’t know, I never asked my parents what army it was. But I know at that point I just saw the Germans afterwards because they're the ones that took us as prisoners after, so I really didn’t see any Russian soldiers after that. And there was a wagon full of stuff and we were walking on one side, and this other girl, about my age, was walking on the other side, and the grenade was thrown, and she was very close to me, and she got killed, and I didn’t. And of course there were other people that were killed but I remember her because she was a friend of mine, you know? And that was very, very tragic.”

While Belarus remains a deeply troubled nation, widely regarded as Europe's last dictatorship, modern-day Vitebsk Oblast is a thriving tourist destination known as Belaruskaye Paazerye, or land of the lakes, replete with rare plants and wildlife. The wasteland of my mother’s infancy now boasts an excellent infrastructure connecting it with commerce in bordering Russia, Ukraine, Poland, Lithuania and Latvia. Despite the political and social turmoil helmed in Minsk by (Vitebsk Oblast native) President Alexander Lukashenko, modern-day Vitebsk Oblast is closer to Chagall’s memory than my mother’s.  The region’s two major theaters, philharmonic society, 28 museums and the international Slavyanskiy Bazaar arts festival make it a cultural destination.

My mother’s only travel was to concentration, labor and displaced persons camps in Poland and Germany, while Chagall spent the bulk of his career in Russia, France and the U.S. Still the fragmented images of Vitebsk, “the soil that nourished the roots of my art,” in Chagall’s work disguise, but do not erase, the darkest multiple personalities of a homeland that always has been rife with strife.

Alexander Pushkin, who passed twice through Belarus: in May 1820, leaving for the southern exile; and in August 1824 on his way to exile from Odessa to the village of Mikhailovskoye, died before finishing a novel, Dubrovsky, inspired by a friend, a nobleman of Vitebsk Oblast.

Pushkin’s influence is found throughout Vitebsk, home to at least two monuments, a street, a public garden and a bridge named after the Russian poet. No doubt he contemplated the region’s conflicted character.

"The illusion which exalts us is dearer to us than ten thousand truths." (Pushkin, as quoted by Anton Chekhov in Gooseberries.)
Posted by Natasha Gural at 3:58 PM No comments: