Geography Of The Heart: Memory Eternal To My Babushka Alexandra 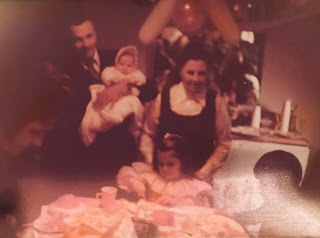 From my early childhood until my maternal babushka (grandmother) Alexandra Dimitrievna (Dimitrieva) Grishaev lost her ability to speak and was bedridden for nine years until her death 21 years ago, she and I bantered about where she would go when she died. She’s buried alongside my maternal degushka (grandfather) Grigori Ustinovich Grishaev, at the largest of three cemeteries at Holy Trinity Monastery in Jordanville, New York, where celebrated Russian composer and pianist Dmitri Dmitriyevich Shostakovich and his wife Nina Varzar lived and left a home to their son, conductor and pianist Maxim Dmitrievich Shostakovich.

Born March 3, 1913, in Dubrovka, a village in Vitebsk Oblast, Belarus, my babushka died one day after he 85th birthday on March 4, 1998, in Wilbraham, Massachusetts.

In stark contrast to all of my school and neighborhood peers, I attended countless funerals as a young girl, and visited my grandparents’ mostly older friends confined to some of the most dilapidated, under-staffed, and sometimes unsanitary nursing homes, municipal homes, and municipal and veteran’s hospitals, nearly every Sunday after Liturgy and Orthodox Holy Days. This was the fate of so many forced immigrants from German displaced persons camps who fell ill before they could save enough money working hard labor jobs around the clock to pay for more humane facilities.

Death wasn’t a taboo subject as it was for most of my non-church friends. It was an intrinsic part of daily life, and part of my childhood dialogue along with visceral stories of the countless murders, killings, and untimely deaths of my mother’s three infant brothers, dozens of close family members, and hundreds of dear friends, under Stalin, the Belorussian Partisans, and Hitler. My mother, her parents, and family and friends, were trucked “like cattle,” by my mother’s recollection, from labor camp to labor camp, with the fortunate few surviving to find access to food, clothing, education, and church services at the DP camps in Germany.

Holy Trinity Monastery was some three hours without traffic from my childhood home, mostly along a desolate stretch of I-90. To me that ride always was the future route of my babushka’s final resting place. Somehow, referring to it being “Далеко. Далеко.” made it easier to think about that last drive following a speeding hearse on the fiercely policed interstate.

I was days shy of my 27th birthday when my babushka died at my parents’ home, and thereby expected to drive the car. The Ukrainian-American funeral director, who respected Slavic customs, illegally agreed not to embalm her and not to seal the casket, which would remain open overnight at the Monastery. I feared a State Trooper pulling over the hearse and discovering this carefully rehearsed crime.

Bringing my babushka “home” to Jordanville didn’t seem “Далеко. Далеко.” It seemed endless. She’d been waked, in an open casket, at my parents’ home where she spent the night in my parents’ dining room ahead of the voyage to a hamlet in the town of Warren, Herkimer County, New York, at the intersection of New York State Route 167 and County Route 155. It’s nowhere to most people, but a sacred destination to thousands of Russian Orthodox Christians. Settled by European Americans after the Revolutionary War, the name was derived from the nearby Ocquionis Creek, which was used by settlers for baptisms and likened to the Jordan River. Jordanville is now best known for the Monastery. Most Russians from my grandparents’ and my mother’s wave of immigration in 1950 refer to the Monastery and cemeteries simply as Jordanville.

When taking our son Michael Alexander to his first sleepaway camp on Lake Oneida this summer, I drove past the exit to Jordanville. Guilt poured over me, even as my focus was the pending lifetime adventure for my son and the complex emotions that accompany leaving your child alone for the first time. I had to fight an impulse to make that left-hand turn. It’s been too long since I’ve been to Jordanville. I’ve taken my husband Mike to see the graves of my father and my maternal grandparents, but haven’t, in nearly nine years, taken my son.

Далеко. Далеко. Jordanville is about four hours from my home of two decades in New York City, as I-90 cuts through western Massachusetts making the route from there an hour shorter. It may be far, especially for a family that has to rent a car, but it’s forever close, imprinted on my psyche.

Posted by Natasha Gural at 5:04 PM