‘The Chaos Of Antiquity’ Forever Haunts a Disputed Borderland

The written or recorded history of Belarus gets stranger with modern interpretation, especially with the nationalistic pride that marginalizes its inhabitants. My mother and her parents have never identified as Belarusian, they consider themselves ethnic Russians who were born in Belarus. They all were born and lived so close to the Russian border that my maternal grandmother carried my infant mother into Russia to baptize her.

Belarus literally translates as White Rus, and had for years been called White Russia, a name considered derisive by Belarusian nationalists, but still widely used in many languages and countries. Rus is not short for Russia. Kievan Rus was a powerful East Slavic state dominated by the city of Kiev, which is the modern day capital of Ukraine. Rus dates back to the 9th century and is traditionally viewed as the beginning of Russia and the ancestor of Belarus and Ukraine, though this theory is often disputed. Kiev is regarded as the original Holy Russian Empire, because Vladimir the Great, the pagan Slavic ruler of Kievan Rus, in 988 converted the state to Orthodox Christianity.

Some cite Slavic lore that claims Vladimir chose Orthodox Christianity over the teaching of Muslim missionaries because his people liked to drink wine, a practice prohibited by the Muslim faith. His motive was unlikely a spiritual one, at any level. Vladimir married the Byzantine emperor’s wife and viewed the establishment of a church as essential to development of a powerful state. Kiev traded fur, animal hides, burlap, hemp and hops in exchange for Byzantine wine, silk, steel blades, religious art and horses. Byzantine imperial ideals clearly influenced Russian political life. Kievan Rus was effectively eliminated in 1237, when Batu Khan, a grandson of Genghis Khan, invaded and over three years the Mongols (or Tatars) destroyed all of the major cities of Kievan Rus except Novgorod and Pskov. The regional princes were not deposed, but were beholden to the Tatar state, which became known as the Empire of the Golden Horde. Both the Swedes (in 1240) and the Livonian Brothers of the Sword, a regional branch of the Teutonic Knights, (in 1242), pounced but failed to defeat “Russia” or Rus.

At the time of the Tatar invasion, modern-day Moscow was an insignificant trading outpost, but its remote, forested location buffered it from attack and occupation, and its rivers provided access to the Baltic and Black seas and to the Caucasus region. It was the rule of ambitious princes that gave rise to the state of Muscovy: Daniil Aleksandrovich secured the principality for his branch of the Rurik Dynasty, which was founded by Varangian (Viking) prince Rurik and ruled Kievan Rus after 862. His son, Ivan I, was given the title "Grand Prince of Vladimir" from his Mongol overlords, and he cooperated closely with the Mongols to gain control over Muscovy's chief rival, the northern city of Tver. In 1327 the Orthodox metropolitan transferred his residency from Kiev to Moscow, shifting spiritual power from Kievan Rus to Moscow, even as the Tatars presided over the political state until 1480. While Eurasianism is still emerging in the study of Russian history, the Asian influence and identity have been dominant since the rise of the tsars. A third of Russian nobles had Tatar names and Ivan the Terrible descended, on his mother’s side, from Genghis Khan.

Rather than delve deeper into this part of history, I want only to suggest that while the Vikings may have their roots in my mother’s birthplace -- archaeologists in September 2012 found Viking artifacts from the 10th and 11th centuries in Vitebsk Oblast – her national identity may be built on Tatar ideology and bloodlines. This makes the term “White Russia” that much more contested. My maternal grandmother had blue eyes and translucent light skin that had to be shielded from direct sunlight. My maternal grandfather had dark eyes and hair and an olive complexion. My mother has blue eyes and an olive complexion that tans quickly and never burns. My mother knows very little about her father’s parents, other than they were born “somewhere in Russia.” However, a Tatar heritage might explain why my maternal grandfather left the Soviet Army, why so many members of his family were brutally killed by the Belarusians, why he, his wife and children were targets of the Belarusian Partisans, as well as Stalin and the Nazis. It would also explain his loyalty to the Holy Russian Empire, even its seat in Moscow.

In “The History of Peter the Great, Emperor of Russia,” Voltaire states: “It is not my business in this place to inquire, why the countries from Smolensk, to the other side of Moscow, were called White Russia, or why (German geographer Johann) Hubner gives it the name of Black, nor for what reason the government of Kiev should be named Red Russia.”  It's important to note that Voltaire wanted to "make myself Russian," and created an alter-ego using the persona of a Russian diplomat, Ivan Alethof, as the “author” of his 1760 poem "The Russian in Paris.”

“It is very likely that Madies the Scythian, who made an irruption into Asia, near seven hundred years before our vulgar era, might have carried his arms into these regions, as Gengis-Khan (sic) and Tamerlane did afterwards, and as probably others had done long before Madies. Every part of antiquity is not deserving of our inquiries; that of the Chinese, the Indians, the Persians, and the Egyptians, is ascertained from illustrious and interesting monuments; but these monuments suppose others of a far more ancient date, since it required many ages to teach men the art of transmitting their thoughts by permanent signs, and no less time was required to form a regular language; and yet we have no such monuments even in this polite part of Europe. The art of writing was a long time unknown to all the North: the patriarch Constantine, who wrote the history of Kiev in the Russian language, acknowledges, that the use of writing was not known in these countries in the fifth century.”

“Let others examine whether the Huns, the Slavs, and the Tartars, formerly led their wandering and famished tribes towards the source of the Boristhenes (the antiquated term for the Dniepr River and its eponymous river god); my design is to show what czar Peter created, and not to engage in a useless attempt, to clear up the chaos of antiquity. We should always keep in mind, that no family upon earth knows its first founder, and consequently, that no nation knows its first origin.” 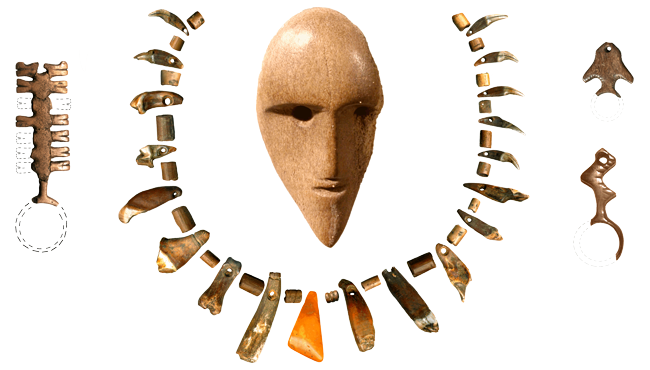 Many have, since Voltaire’s account from 1857, made exhaustive efforts “to clear up the chaos of antiquity,” generally to rewrite a history that lends to rabid nationalism. But as new genetic data emerges this misguided pride is called into question.

Belarusians together with Ukrainians and Russians represent the East Slavic linguistic group, largest both in numbers and territory, inhabiting East Europe alongside Baltic-, Finno-Permic- and Turkic-speaking people. There have been until very recently only few genetic studies performed on this population.

A June 2013 research article, “Uniparental Genetic Heritage of Belarusians: Encounter of Rare Middle Eastern Matrilineages with a Central European Mitochondrial DNA Pool,” published in PLOS ONE, found that 80% of the paternal Belarusian gene pool is composed of R1a, I2a and N1c Y-chromosome haplogroups, a profile very similar to Ukrainians and Russians.

The Y-chromosome reflects movements of people in central-east Europe, as early as the start of the Holocene (beginning at the end of the last Ice Age about 11,000 years ago and characterized by the development of human civilization.)  The matrilineal legacy of Belarusians retains two rare mitochondrial DNA haplogroups, N1a3 and N3, both of Middle Eastern origin.

As Eurasian studies begin to displace Slavic studies at major universities and more DNA analysis becomes available to scholars, the ethnic identity of Belarusians, or at least the people born there, may help us correct the complicated history of a population that has withstood a perpetual warpath. My own desire to understand why so many members of my mother’s family have been brutalized and killed drives my interest in the science as well as the social history and historical sociology that has yet to gain any wide spread recognition. My own scholarly experience has been colored by either national identity (no matter how subtle) of my professors, as well as myriad incarnations of Slavophilism adopted often by non-Slavs. Much of what I was taught is at odds with what I see when I look at photographs of my mother’s father and grandfather.