Many, if not most, Americans I know generally put off planning for funerals, picking burial plots and selecting tomb stones as long as possible. I’ve known people who have had to make final arrangements for elderly loved ones, something unthinkable for my mother and her parents. Leaving that responsibility – financially, emotionally and socially – to another person would be cruel, unfair and well, unthinkable. Beyond the added benefit of the cost savings that comes with paying in advance and the comfort of knowing that everything will be executed properly, there is a compelling reason why people like my mother and her parents take pride in such morose tasks. My mother’s brothers – among dozens more family members and childhood friends – were dumped into mass graves that have never been marked, unearthed or in any way recognized as burial places.


Of all the villages I’ve researched in Vitsebsk Oblast, Lemnitsa is by far the most elusive. My (for lack of proper term) cousin, Tanya Grishayeva (her paternal grandfather was my maternal grandfather’s younger brother), who was born in Mozyr, Belarus, and now lives in Minsk, helped me cobble what little information – mostly photographs -- is out there.

Perhaps one day the government or an organized group in search for bodies of fallen soldiers will get around to excavating Lemnista, the burial place of my mother’s three brothers who died in infancy. In September 2011, the remains of soldiers of the Red Army were discovered near the village of Noviky, Vitebsk, as part of the CIS International Memory Watch 2011. The effort includes volunteers from Belarus and Russia seeking unearthed remains that will be re-interred in one of the mass graves in Vitebsk Oblast.

For now, the village of Lemnitsa seems lost in time, with a grainy image of a 19th century 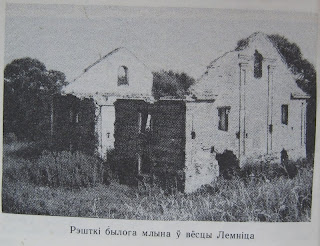 water mill that was destroyed and mention of a church in honor of Saints Kosmy and Damiana (Orthodox Saints Cosmas and Damian, or Kosmas and Damianos in Greek) built in 1836 but destroyed around 1910, among the little evidence such a place exists.

There is a haunting consolation that comes with learning that the ghosts of brothers (in some stories, twins) Kosmy and Damiana share my uncles’ burial place. Their history represents a trinity of stories, one for each of my mother’s brothers: Pyotr (Peter), Mikhail (Michael) and Ivan (John.) The Holy Trinity is a key belief in the world’s second-largest (yet most often neglected and ignored by the West) Christian church, and the theme permeates culture, literature and secular life. By the 4th century, a polarity developed between Eastern and Western Christians over their respective understandings of the Trinity. The West viewed God primarily as one essence (the Trinity of Persons being conceived as an irrational truth found in revelation), while the East considered the tri-personality of God the primary fact of Christian experience. The Cappadocian Fathers (Gregory of Nyssa, Gregory of Nazianzus and Basil of Caesarea) were accused of being tri-theists because of the personalistic emphasis of their conception of God. Modern Orthodox theologians tend to emphasize this personalistic approach to God.

Orthodox Christians celebrate three different sets of saints by the name of Cosmas and Damian, each with their own feast day:

St. Michael's Church in Munich as well as the convent of the Poor Clares in Madrid claim to have the skulls of Cosmas and Damian. For Orthodox Christians like my mother, the need to worship and believe in the authenticity of such relics is powerful. Imagine as a young child not only watching all three of your siblings suffer and die, but also to never know exactly where they were buried or have any way of paying proper respects.

This makes the opportunity to choose and arrange for your own final resting place something of a privilege. I do respect anyone’s desire to decide how their own body will be treated upon death and how they will be remembered. But I always shudder when I learn of people who bury loved ones without any sense of tradition or ritual, assuming that is what the deceased had intended. I believe that those who want no ceremony or guests clearly state such desires long before their demise, and such requests are to be honored. But the notion of simply cremating or arranging for burial without even a dinner featuring the departed’s favorite food or a gathering of some kind, albeit secular and informal, is to me a form of neglect.

Most of the images that exist online of Lemnista are of a railway station connecting the village to routes into Russia, Ukraine, Poland and Lithuania. A photo of the passenger building at the station is especially eerie, as there are two rectangular cement-enclosed flower beds in the parking lot that resemble the open grave covers filled with flowers at the cemetery at Holy Trinity Monastery in Jordanville, N.Y., where my mother’s parents and my father are buried. 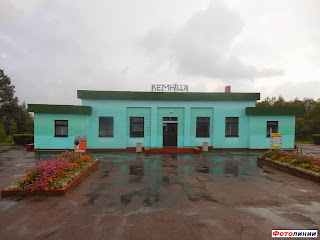