The years my mother spent at Lyssenko Displaced Persons Camp in Hanover, Germany, were “very good.” The young girl who’d spent her first half decade herded from labor camp to prison camp to concentration camp had finally found a “home.” Those formative years at Lyssenko were not rife with killings and rapes and bombs and grenades and constant fear of which enemy would strike next and at what gate.

The notion of leaving a displaced persons for a new life in a faraway land sounds like a dream for most people. To my mother it was an end to the first era of her life that didn’t involve constant suffering and instability. And it meant saying goodbye to people she came to know as family in the wake of losing so many blood relatives. It was horrifying. It meant recalling all the previous tragedies and again losing friends by separation.


“And then people started to immigrate to different countries, and they started to place us. Two of my father's friends went to England. And they had lost their families, too, during the war. Whether they were killed or what happened to them, I don’t know. They sent us pictures from England. They were handsome men and when they got to England, they had sent us rubber boots, which were beautiful, and chocolate candy. I can't find any here like that. It was like a candy bar, but it had crispy part inside of it. That was delicious.”

I’d brought home, from my first trip to England in 1991, what I thought my mother had described but she insisted it wasn’t the same. That time in her early childhood offered her very first taste of joy and nothing since could be sweetening to comparison. It was as if anything from those years was magical, almost otherworldly, and could never be duplicated again. I can only imagine the shifting emotion from a life of desolation and destruction to one that offered her very first creature comforts. They were so simple, yet perfect, those articles of clothing or pieces of chocolate. I think my mother begrudges herself any of life’s comforts, partly because of the guilt, but also because she can never again feel such immense satisfaction that comes with the very first experience.

For my mother, all of these places are defined by whatever iconic item she received in a care package or the descriptions in letters written by those who had relocated. She has never left the United States, save for Canada and the Caribbean, since childhood, and to her those places where other families from Lyssenko ended up remain frozen in memory and unchanging by time.

It makes sense that she would hold on to any image or idea from those years, as they were her first happy memories. All my wanderlust is lost on her, and I feel like a criminal, stealing her childhood snapshots of places she’d never visited by informing her of sweeping social change.

“A lot of our best friends, my best friends, my mother's best friends, went to Australia, some went to Brazil, some went to Argentina. But my father wanted to go to America, because from what he knew from the history lessons in school, it was the best country to go to. And because I was the only child, it was easier for us to choose to go to a different country, and my parents were still young and healthy, so we didn’t have problems. But America was the hardest country to get to because we were in British zone, but we used to get coffee, and we used to (barter and) trade it with the Germans because they didn’t have the good coffee. It was chicory, but they liked it, so we never had drank it ourselves. We always used to trade it for clothes or something. At that time, it was very, very good for us, because we could get beautiful clothes for the coffee, and again berries, we used to go pick berries and trade those. And I sang and we had a church, and I sang in a church choir. We had Christmas parties. It was wonderful. We used to go Christmas caroling. It was a wonderful life, you know.” 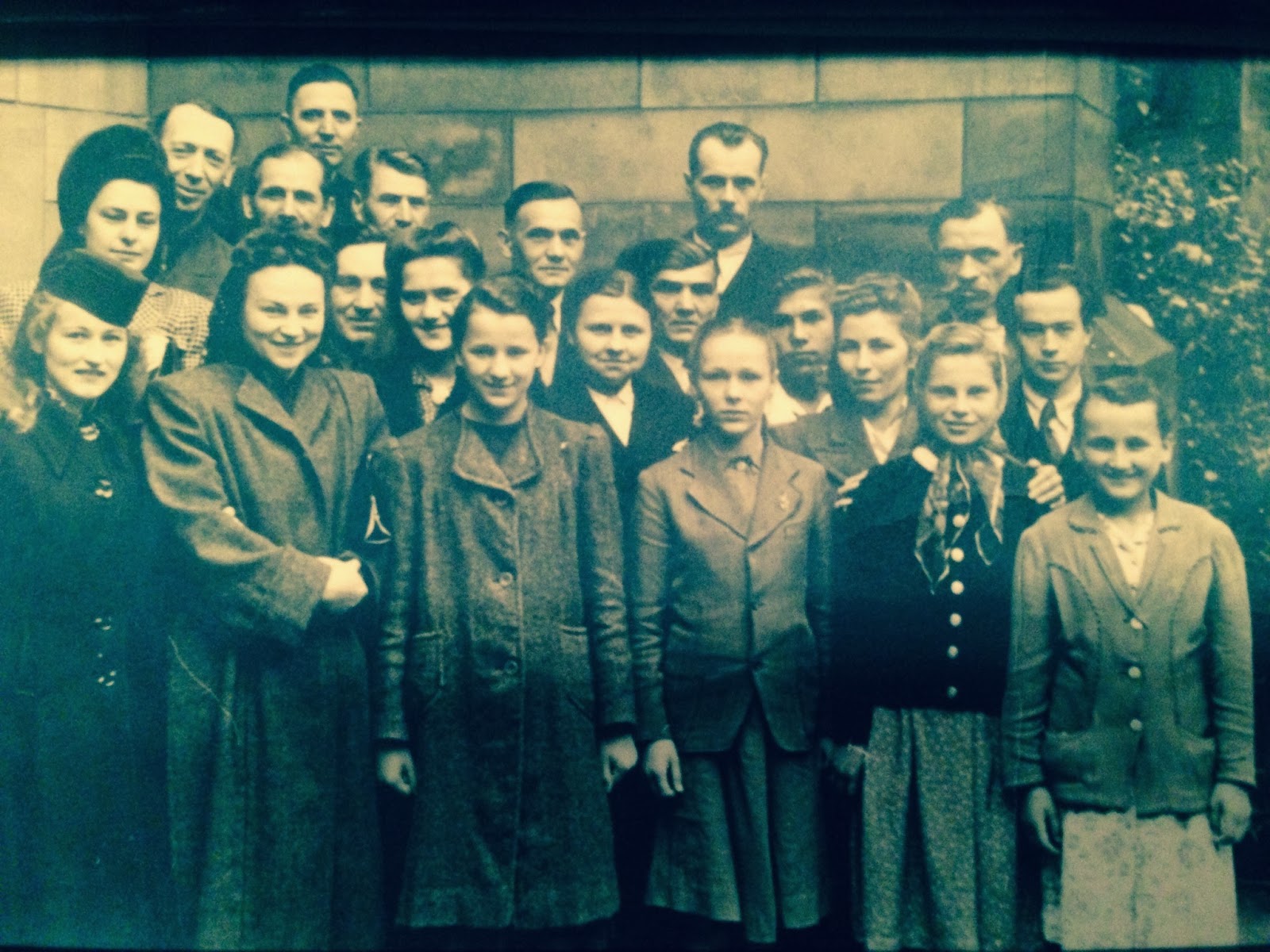 My mother’s explanation that her parents were selected to come to the U.S. because of their savvy in trading with the Germans in the British zone is lost in her happy memories. She clings to those early years, which are forever idyllic for their simple pleasures. There is an innocence that overrides any ignorance that may stem from an unwillingness to acknowledge how culture has changed with time.


My mother and her parents ended up in New Hampshire, not far from Dartmouth, but still in a community that hadn’t been opened to the wider world. Stevens High School in Claremont, New Hampshire, didn’t offer English as Second Language and there was no public assistance available to her family. They had to toil to pay back every penny to the farmer who had sponsored their trip here via Church World Services. They lived without hot water for years, working at multiple manual labor and service jobs around the clock for a pittance of a wage, and saving to have fewer comforts and concessions than those that were available at Lyssenko or through bartering with the Germans. They traveled frequently throughout the Northeast to visit with friends from Lyssenko and to maintain a dispersed community in the absence of the ghettos that allow most immigrants to retain their culture.

“Some of my friends did come to America. One of them lives in Connecticut now. And the others, mostly all of them, live in New Jersey. I went to eleven weddings and I was a bridesmaid. [laughter] But the camp was actually the happiest part of my life at that time, because we didn’t have any cares. And we had food. We had clothes. It didn’t bother us that we slept on cots in just a corner of a room. We were all just happy. People used to go fishing, and they would get fish and we would have parties and stuff like that. My mother's best friend, the ones that went to Australia afterwards, her husband somehow had good luck of catching a lot of fish. One time when it was my birthday, he says ‘this is going be for Luba's birthday’ and he caught so much fish and since we didn’t have a big stove with hot plates, a lot of women, like five or six, were frying that fish. They had a big, big party for me at that time.”

My mother believes it was her 10th birthday, but the date isn’t a detail that matters.

“That was the best birthday party I ever had and it was the first one I ever remember. And that was very good. There were a lot of people at the table. I don’t know, maybe twenty, maybe thirty, I don’t know. A lot of people. And of course, there was vodka but we kids didn’t drink. [laughter] We didn’t have to.”

It is unsurprising that mother’s happy memories are vivid and retold in great detail. She is not one to repress any memory and the abundance of traumatic ones had to be offset somehow, if only to cope.

In the epilogue of The Brothers Karamazov Book XII, Chapter 14, Alyosha offers life-affirming hope for the next generation when speaking to a group of schoolboys at the funeral of their peer Ilyusha. Memory Eternal (transliterated from Old Church Slavonic as Vechnaya Pamyat) a chant sung at the end of Eastern Orthodox funerals and memorial services is heard in the background. Alyosha epitomizes the ideal human being (or, as my father would have said, a human becoming as humanism is a lifelong pursuit) in a Dostoyevskian universe rife with the conflicts and constraints of faith. Identified at the start of the novel by the narrator as its hero, Alyosha is an exemplar by being open-minded and forgiving. The character is named for Dostoevsky's son who died of an epileptic fit at age 3.

"You must know that there is nothing higher and stronger and more wholesome and good for life in the future than some good memory, especially a memory of childhood, of home.  People talk to you a great deal about your education, but some good, sacred memory, preserved from childhood, is perhaps the best education.  If a man carries many such memories with him into life, he is safe to the end of his days, and if one has only one good memory left in one's heart, even that may sometime be the means of saving us. "