Roaring laughter and exhilaration breathed new life into my parents’ living room, where a group of my father’s closet friends and professorial colleagues gathered on this day in 1996 to fete his 70th birthday. It was a radical departure from the everyday remorse that created an atmosphere in that room, so heavy that it was like trudging through cement while blinded by fog.

The small party was a surprise organized by my mother and me to honor my father, Michael William “Brother Mike” Gural. The house where I was raised and where my mother still lives alone, has played host to more memorials, wakes (including my maternal babushka spending the night in an open casket in the dining room), and other rituals focused on death and loss, rather than cheerful festivities. Up until two years ago when my son Michael Alexander guided me back to the church with a commitment to faith that didn’t involve profound and constant sadness, misery, guilt, and mourning, I thought I was “sinning” if I wasn’t constantly lugging a ponderous sense of worthlessness.

Looking back to Oct. 18 22 years ago, I now realize the joy that transformed the living room into a celebration of life was the most truly Orthodox experience I’ve had there, in the house where I was partly raised. (I spent most of my formative years with my maternal babushka and degushka in a very different multi-ethnic urban neighborhood, which made going to school in a very white, very quintessential New England, suburb a culture shock.) My babushka and my father died in that house. My babushka’s death bed remains as a shrine, and my childhood bedroom where my father drew his last breath is where my husband and I sleep when we visit. My mother tempestuously scolded me several years ago when I commented that it was depressing to sleep in that room and eat in that dining room: “Obviously, you didn’t love your grandmother or your father!” 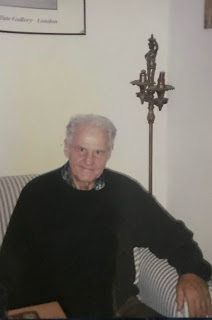 I must remind myself to embrace that joyous Oct. 18, 1996, when Brother Mike’s crystal blue eyes glistened and his impeccably white, straight teeth shined as he flashed a fixed (well, for the duration of the celebration) smile. That’s the image of my father I strive to hold dear, every minute. That image reminds me so much of the grandson he never met. My son’s hand gestures, when he begins to wax philosophical about a correlation he’s just discovered, uncannily mimic those of the дідусь (didus) he never met.

Of course my father had a dark side, though the best of it was his black humor and his penchant for classic horror and the occult, which I immediately adopted. He told me, repeatedly over three decades: “If you can accept that life in 99 percent disappointment, you may find happiness.” He joked on Oct. 18, 1996, “You must all know something I don’t. Clearly, I’m about to die.”

Brother Mike, who never took an aspirin or any prescription medication, who swam and exercised every day, who labored outdoors every day, who never smoked, who drank only socially, who ate vegetables he grew, who voraciously studied natural medicine and curated his own supplements, was in fact “dying” on Oct. 18. 1996. Specifically, despite his doctors’ incessant claims that “you’re healthier than any of 30-year-old patients,” my father was dying of cancer that went undiagnosed until four years later, when it was Stage IV and metastasized to every vital organ, and eventually his brain.

In an effort to maintain the joy that permeated Oct. 18, 1996, I won’t rant about the failures of health care in western Massachusetts, where fraud and incompetence are rampant. I will refrain from wallowing in the regret that my parents chose to not seek treatment with top oncologists at Dana-Farber or Memorial Sloan Kettering, where my former colleagues used their influence to score “impossible” appointments.

“It's life that matters, nothing but life—the process of discovering, the everlasting and perpetual process, not the discovery itself, at all.” _ Fyodor Mikhailovich Dostoevsky

Posted by Natasha Gural at 11:50 AM No comments: